You are at:Home»Innovation»Using real-time monitoring to save wildlife
By Newsroom on June 19, 2015 Innovation

Do you know where your study animals are? How fast have they travelled over the past day or week? How far are they from a river, or from a highway?

Real-time monitoring: How timely location data can keep wildlife out of danger zones

Previously, wildlife biologists had to estimate the locations of their study subjects, using either triangulation from two or more receiver locations or identifiable landscape features on aerial photos or hand-drawn maps. With the advent of GPS technology, they can pinpoint the location of their subject to within a few meters, at any given time, with the help of GPS (Global Positioning System) animal tracking tags. When worn by an animal, a GPS-based tag can tell us where the individual is in the landscape and how he or she uses the landscape over time, without our having to follow them. However, only very recently has the technology advanced to allow researchers to monitor animals in real time.

Using GPS-based information, wildlife researchers and managers can map species’ distributions, identify individuals’ home ranges and migration patterns, and, using computer algorithms based on previous behavior, recognize “typical”movement patterns. With real-time access to this data, when the animal moves in an “abnormal”pattern, according to the algorithms, the information can aid in detecting possible injuries and facilitate quick responses to illegal poaching events.

A GPS-based tracking system involves a receiver (for wildlife, usually a collar placed on the study animal) that picks up signals from several of the GPS satellites that continually orbit the Earth. It then calculates the unit’s location on the globe by triangulating the position of three or more of these satellites. The more spread out the satellites, the more precisely the location will be estimated.

The GPS-based device stores the positional data until they are retrieved by either recapturing the animal wearing the collar or downloading the GPS data remotely (i.e. wirelessly). Data can be remotely received either via a portable receiver (typically hand-held), or transmitted to a base station through a ground-based GSM (Global System for Mobile communications) network, via SMS or data links, or through a satellite-based network, such as Iridium or Inmarsat (Figure 1).

A researcher can also program some GPS-based tags to send positional data back to him or her at specified intervals in time, which has typically varied from hourly to daily or weekly, depending on battery life constraints. (** Your handheld GPS provides you with continuous updates of your location because it stays on continuously, as you can recharge it every day. An animal tracking tag stays on the animal for months, so to prolong battery life, it takes the current point location and turns off immediately.) 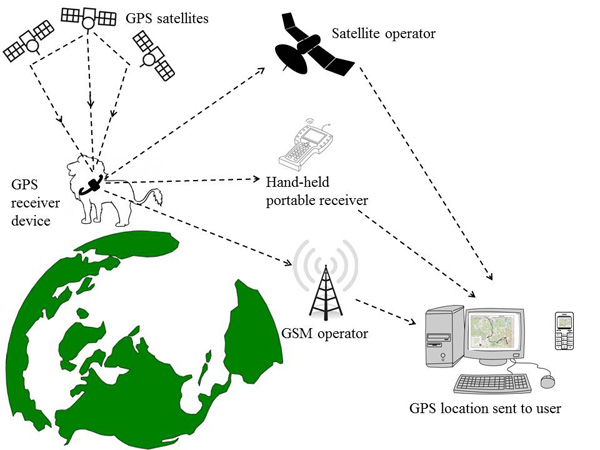 While GPS locational data updates every second, GPS-based tracking devices currently lack the battery power to receive and transmit these data continuously. Nevertheless, real-time monitoring (RTM) enables the researcher to program the tag to transmit data immediately if the animal moves in a particular way. In a paper published in 2014, researchers Jake Wall, George Wittemyer, Brian Klinkenberg and Iain Douglas-Hamilton describe the novel opportunities that real-time monitoring offers for wildlife conservation and research. From their experience with real-time monitoring (RTM) of 94 African elephants in ecosystems in Kenya and South Africa (Figure 2), the researchers suggest that this GPS tracking technology is especially applicable for protecting species that are either under immediate risk of hunting or are likely to interact frequently with people. 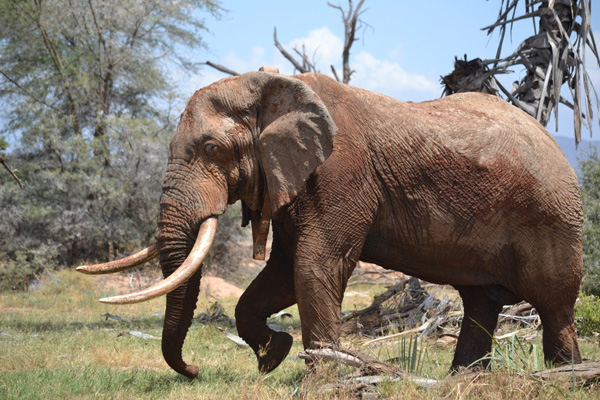 Real-time data on the position of tagged animals in relation to dangerous features in the landscape allow wildlife managers to respond rapidly and proactively to evolving situations, providing the opportunity to intervene prior to any incidents and remove these individuals from danger zones. For this study, the author team designed sophisticated software algorithms that analyze incoming movement data. The algorithms can determine the animal’s proximity to pre-determined points or areas of interest and send immediate alerts to managers, normally via SMS or e-mail, when animals move too close to high-risk features or enter a dangerous area. These virtual boundaries are popularly termed “geofences”. Real-time location information is especially important for animals prone to frequent interactions with people, such as elephants, or where contact between wildlife and livestock is of interest due to potential disease transmission between the two. 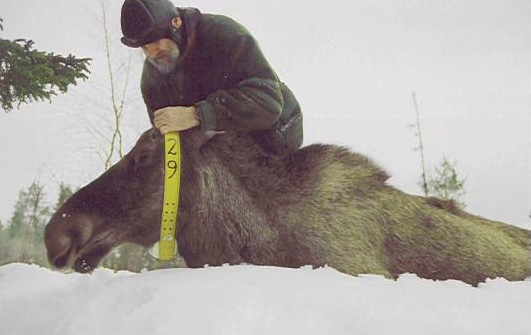 Figure 3. Not just elephants: a researcher from the Swedish University of Agricultural Sciences deploying a GPS/GSM RTM-enabled collar on a moose in northern Sweden. Photo credit: E. Andersson.

Elephants often raid local farms, causing sporadic but substantial damage to crops and provoking sometimes-deadly responses from farmers. In the paper, Wall and his colleagues report on the success of RTM to alleviate this conflict between humans and elephants in Kenya. The researchers used position data from RTM-equipped GPS collars on target elephants to alert communities and wildlife managers when the animals moved close to farms. The alerts gave communities enough warning time to divert the elephants away from the crops and avoid potentially fatal confrontations between elephants and farmers.

By providing researchers and managers with regular animal locations and movement patterns, GPS data can help them identify a “normal” range of movement rates, as well as long-term and current hotspots of target animal activity. Such data also help park mangers to ensure that patrols are set up in the most effective means to protect these animals against poaching.

RTM-enabled tags can be programmed to recognize and alert managers of immobility and unusual changes in movement rates of collared animals through algorithms designed to detect deviations (much faster or slower) from “normal” behavioral states.

Wildlife managers are alerted to unnatural variations in movements or immobility and can immediately deploy patrols to investigate the possibility of an injury, illness or a poaching event. Current location data give wildlife managers more time to intervene appropriately and a better chance of saving the animal or catching poachers at the scene of the crime. 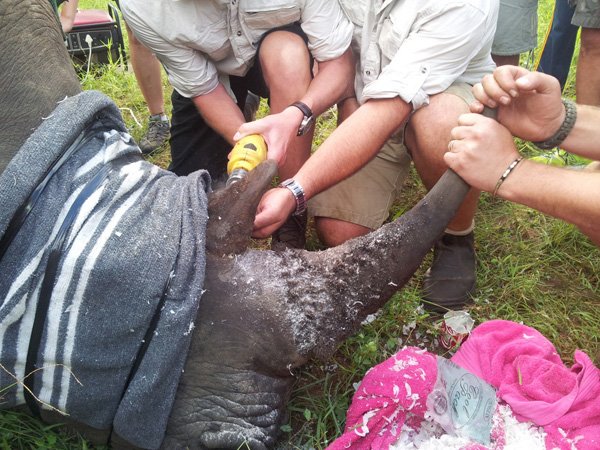 RTM technologies are still constrained by cost, with each device costing between US$1,700-6,000. The cost is particularly challenging where collars are vulnerable to damage from rough treatment by their hosts. When study animals roam out of cellular network coverage areas, data transfer via GPS/GSM is restricted. Moreover, not all researchers can use this technology: GPS-based communication requires lots of power (i.e. bigger batteries) to transmit data in real-time, which adds substantially to the weight of the tag. The necessary trade-off between weight and the duration of operation essentially means that tags for smaller animals have a low operational lifespan.

Nevertheless, as technology continues to advance rapidly, costs are likely to decrease, holes in cellular coverage are likely to be plugged, and batteries should become cheaper, more powerful, and lighter. Furthermore, advances in using re-chargeable units via either solar- or motion-based charging may allow even small tags to theoretically last forever (Figure 4). 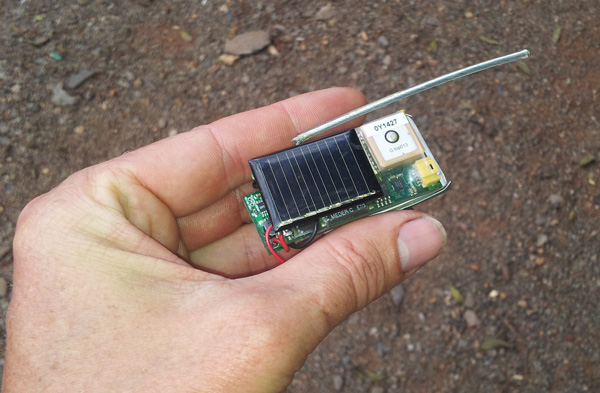 These advances will expand the current capacity of RTM for conservation and research to additional species, uses, and locations. Wall and his colleagues suggest that in the not-too distant future, it may be possible to incorporate measures of internal physiological variables (such as heartbeat and body temperature) and environmental variables (such as external temperature) that co-occur with movement data. Integrating these additional measures with location data will facilitate understanding of complex spatial-behavioral patterns and identifying moments of severe stress experienced by tagged animals — valuable data that can improve management practices, prevent poaching, and reduce conflict between people and wildlife.

Acknowledgements: We thank Jake and Wall and Henrik Rasmussen for their helpful editorial comments and suggestions.

This article was published by Mongabay. You can read the original here

This article is part of a continuing series on emerging wildlife and forest conservation technologies. In July, the series will be added to a new section on Mongabay that will highlight current and emerging uses of technology for a broad range of conservation purposes.