The documentary film Blood Lions: Bred for the Bullet is making an extraordinary impact around the world. Even the European Parliament is sitting up and taking notice of the unholy alliance between lion breeding and canned hunting. The hunting industry is not enjoying the attention and here in South Africa the Professional Hunter’s Association is turning against the purveyors of such practices.

The last few months have been a bit of a whirlwind for the makers and producers of Blood Lions, especially so for Ian Michler, conservationist, safari operator and special consultant to the hard-hitting documentary.

It began with the first screenings at the Durban International Film Festival in Durban in July, and hasn’t stopped. Since then Ian has been in Brussels, Helsinki, Turku, London, New York, Sydney, Melbourne, Canberra, Gaborone and Bogota to promote the feature film that digs deeply into South Africa’s predator breeding and canned trophy hunting industry. And an industry it certainly is, with more than 200 predator breeding farms raising lions for the bullet, the lion bone demand in eastern Asia, and the lucrative petting and voluntourism sectors.

I caught up with Michler on a short break back in South Africa before heading back into the fray and was eager to ask him about the reaction of audiences around the world. “In a word, fantastic,” he responds. “Wherever we’ve been the reception has been overwhelmingly supportive, both of the film and the campaign behind it to end the breeding and canned hunting industry.” 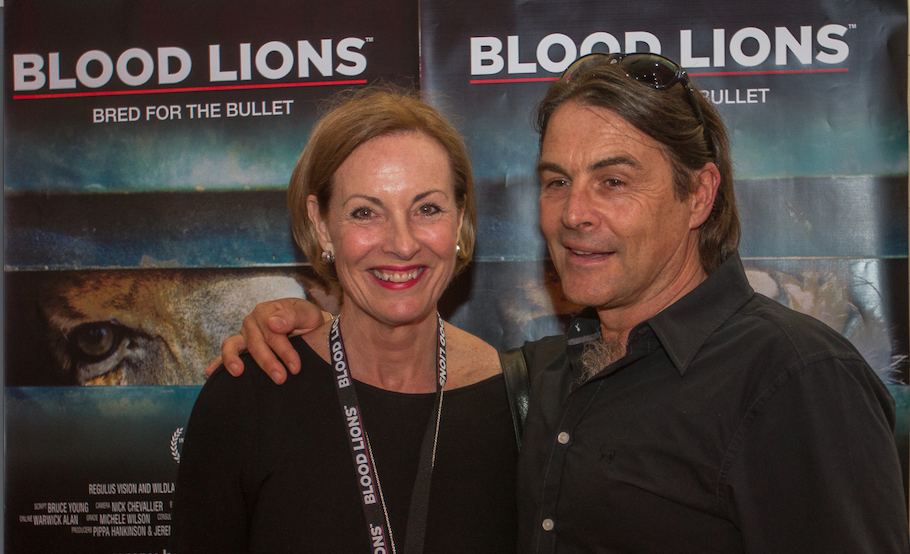 “Even in the United States?” I ask. “Absolutely,” says Michler. “As you know, like here in South Africa, the States has a very strong trophy hunting lobby. But no one took us on at any of the screenings. Hunters know about the film of course and I know they are worried about at the groundswell of opinion against them. This comes through in social media and in other discussions within hunting groups around the world. Clearly Blood Lions and the events around the killing of Cecil in Zimbabwe have thrown their activities into the spotlight and they have been back-footed as a result.

“By contrast,” Michler continues, “while we have to deal with powerful pro trophy hunting voices in South Africa and the US, Europe presents itself rather differently. In Europe the trophy hunting lobby seems to represent the minority of hunters. In fact there is a strong sentiment against trophy hunting per se, not just the canned hunting element of it. European hunters are mostly after meat – what we would call the biltong hunters. We had hunters come to screenings of Blood Lions and they were completely in agreement with the film and the campaign.

Michler’s experiences “on tour” and at screenings in South Africa seem to have been remarkably similar. Public reaction to the documentary – outrage in fact – has been huge and the South African Professional Hunting Association (PHASA) have been squarely confronted by the less savoury aspects of their world. So much so in fact that their president admitted to the urgent need to rethink their “untenable” position on the matter of canned lion hunting.

Well, the re-thinking has happened apace as PHASA certainly hasn’t wasted time in formally turning its back on the controversial practice of captive-bred lion hunting. At the association’s recent AGM a majority of its members voted to distance the association from the practice “until such time as the South African Predators Association could prove its conservation value to PHASA as well as the IUCN”.

PHASA also resolved that any of its members found to be involved in the hunting or marketing of captive-bred lions would face expulsion. Strong words and seemingly a victory for the Blood Lions campaign.

But Michler is cautious. “Many of us have been on the issue of predator breeding and canned lion hunting for 15 plus years and we need to remember that for all that time PHASA has pretty much thumbed their noses at any opposition. 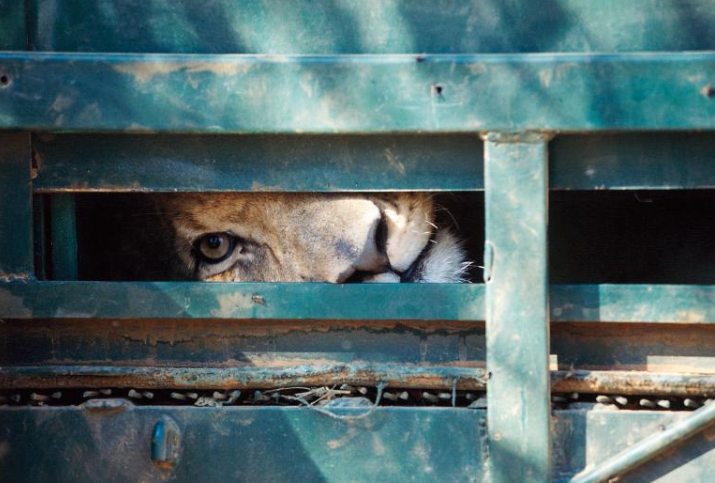 Most of South Africa’s lions spend their lives in captivity – only 30 per cent are truly wild. The film “Blood Lions” tells the story of how lion breeding, canned trophy hunting, and increasingly the lion bone trade, are intertwined. © Ian Michler

“Also, we musn’t forget that when in 2010 the predator breeders were successful in overturning a law aimed at banning canned lion hunting, PHASA were quick to jump on the bandwagon.

“Having said that, I completely welcome the about face on the part of PHASA since the release of Blood Lions. In fact I would go so far as to congratulate the courage and commitment of the current leaders of PHASA to take on their own membership in this manner. Two members of PHASA deserve especial praise: Paul Stones and Garry Kelly have long led a debate around ethics within hunting circles, so much so that they were ostracized by their own organization and had to break away to form their own group. Although belittled at the time, they have carried the day.

Now for the real test

“But now comes the real test”, says Michler. “From now PHASA will be judged not on their statement but their actions – how they go about it from here. Are we going to see them actually take on errant members? Are we going to start seeing the collapse of canned hunting and the closing down of breeding farms? We wait to see. The point is that the hunting industry has had to be dragged kicking and screaming to the table to make this decision in the face of what the world sees as appalling, horrific,and without any conservation merit”

While Michler was abroad things took a bit of a bumpy turn back home. One of the farms featured in Blood Lions took action against the documentary’s producers for harming their reputation as a “sanctuary” and a lucrative voluntourism destination. “It must have been a little disquieting being so far from home when this was going on,” I ask Michler.

“Interestingly, we expected to be taken on by someone,” he replies. “We just weren’t sure which facility would do it. I expect there was communication amongst all of them in the run up to lodging the case. But the fact is that the judge threw the case out in its entirety and also awarded us all costs.

“But, yes, it was disconcerting. Our lawyers, Bowman Gilfillan did an outstanding job in presenting our case. Added to that, Pippa Hankinson – without whose determination the film would never have been made – and fellow producer Andrew Venter also did an excellent job in our defence.

“The reason we were confident we hadn’t overstepped the mark, and it is an important point to make, is that although we openly oppose the breeding and canned lion hunting industry and unashamedly want it stopped, the film doesn’t accuse individuals or places. The judge took the point that we simply ask legimate questions and listen to the answers we are given.” 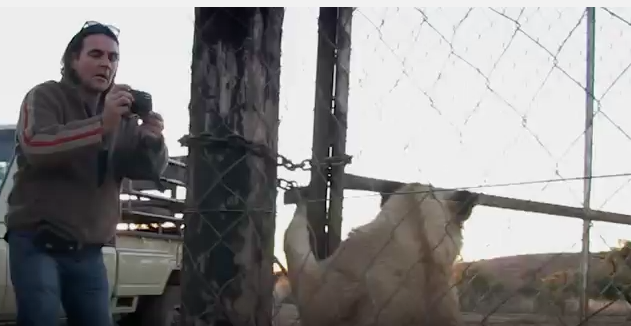 A scene from the film “Blood Lions”

To do this, Michler and cameraman Nick Chevalier had to dig in some pretty sensitive and threatening places. “We had to,” Michler acknowledges. “This industry isn’t transparent, you know, it’s murky and deceitful. There has to be a reason as to how we have gone from a few hundred captive predators to 8,000 in 15 years. At the same time we also know that more than 800 lions have been shot annually in canned hunts. Where have they come from? Who is providing them? Yet if you go from farm to farm few admit to breeding and none will admit to supplying lions for canned hunts. I imagine what they do is put a so-called trading agent between themselves and the property on which a lion will be hunted. So it is easy for them to say with feigned indignation that ‘We don’t breed or hunt our lions’.”

Sustainable use or sustained abuse?

Michler believes that although Blood Lions has proved to be a catalyst for a rapid rethink about hunting and hunting ethics, he avers that it is part of a much bigger sea change. “The stage has been set. We have had decades of the trophy hunting arguments and hard-core sustainable use proponents being in the ascendency. But now there is a growing force within conservation and the wider public saying that we need to reassess our approach to wilderness and wild species. We see this not only in the response to Blood Lions and Cecil, but to poaching and the illegal wildlife trade too – indeed, in the way we treat the planet as a whole. There is a strong sense that a more considered stance is gathering momentum.

“I’m not saying that we need to throw out the whole concept of sustainable use but, as Will Travers of Born Free points out in the film, ‘we need to reinterpret it’. I agree wholeheartedly. Much of what we have seen over the past decade here in South Africa and all over is not sustainable use, but sustained abuse.

“I firmly believe that at end of the day the conservation, economic and community issues have nothing to do with it. The root of it is whether we choose to have an abusive relationship with the planet or not. And this is a deep-seated philosophical matter. The rest is all smoke and mirrors.”

Michler is the first to admit that the battle against the breeders and canned trophy hunting is far from over but hopefully, in the words of Churchill, “it is, perhaps, the end of the beginning”.

So where to next? 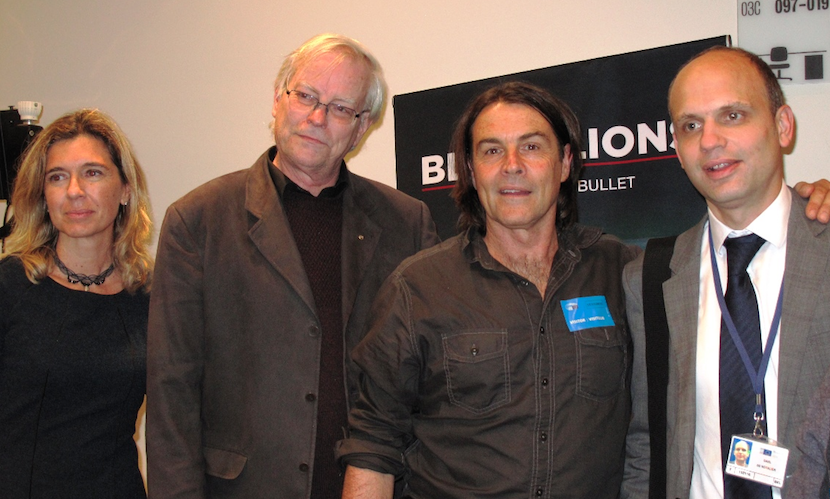 “Well, the presentation to the EU parliament has been the most significant to date so we plan to return in the new year to secure even more commitment. In particular we have been invited to talk to the governments of Spain, Italy and Finland. Once we can get some consolidation in Europe we’ll turn the focus to the United States. But while it is critical to get countries around the world to get legislation in place to ban the import of trophies, it is also vitally important to keep the dialogue open across the spectrum of conservation, political and hunting opinion. And then we also need to be bringing far greater awareness around the fraudulent conservation messages sent out by breeders and petting facilities.”

One of the greatest challenges seems to be to get the attention of the South African government. Its reaction to Blood Lions: silence. Rather strange given the fact National Geographic cited the documentary as one of the decade’s 12 top exposés of endangered and abused wildlife. But maybe not …