You are at:Home»Partners»Silent killers: elephant poaching is not always about hi-tech and automatic weapons
By Newsroom on May 17, 2017 Partners, Wildlife

We have grown accustomed to hearing about hi-tech poachers in guerilla-type units using high-powered weapons. This happens of course, and all too frequently, but increasingly the combination of bows, arrows, deadly poison and a lone hunter brings about the same result. Silently. Faye Cuevas, IFAW’s chief of staff, outlines what is happening in Kenya and gives a moving account of how she imagines the felling of an elephant.

In light of a particular trend, I imagine the poaching of an elephant to take place much like this:

The poacher slowly pulls back the string of the bow and aims the first arrow low at the elephant’s back leg – it’s an intentional shot; meant to slow the animal down. The arrow slices through silence and strikes its target just above the knee. The majestic bull, chosen by the poacher because of the size of his tusks, stops short and trumpets loudly as the arrow makes impact. The elephant begins pacing, injured; the arrow hanging embedded in his leg. The poacher is not done yet. He picks the bow back up and takes a second arrow from the quiver. This arrow is different — its arrowhead dipped in “death poison.” The poacher takes position again, aiming higher on the elephant this time, and releases the arrow. The lethal arrowhead quickly pierces the thick skin of the panicked bull’s front underbelly and drives directly into his heart. The bull doesn’t fall right away. He may walk for some distance, increasingly fatigued as it becomes more difficult to breathe, until, finally, the poison does what it’s designed to do – inflict a silent death by causing the animal’s heart to fail. The poacher watches and waits for his prey to succumb.

The poacher’s war on African elephants isn’t entirely fueled by high-tech automatic rifles, satellite communications, and night vision devices. In fact, in the Tsavo Conservation Area, 2016 saw a surge in elephant poaching using the most primitive of weapons – a bow and arrow. Tsavo is Kenya’s largest national park spanning some 16,000 square kilometers and accounts for nearly half of the country’s formally protected conservation area. 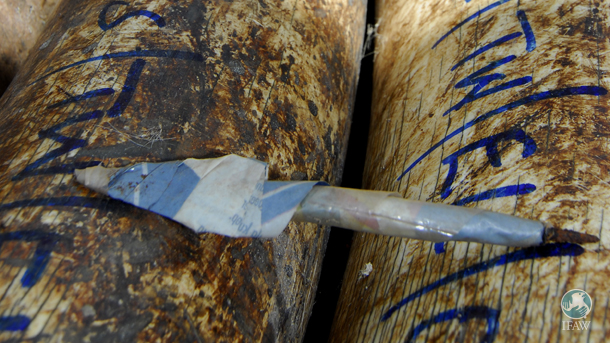 A file photo of tusks of an elephant and the poisoned arrow used to kill the animal, confiscated by Kenya Wildlife Service rangers.

According to analysis conducted by the International Fund for Animal Welfare (IFAW) and Kenya Wildlife Service (KWS) under the tenBoma project, more than 70 percent of the elephants poached in Tsavo last year were killed by poachers using poison arrows.

This is the first year that bow-and-arrow poaching outpaced firearm poaching in this area.

This year sees poison arrow poachers becoming even more brazen in their attacks. “Satao II”, one of the world’s last remaining iconic Big Tuskers, is suspected to have been killed by a poacher’s poison arrow in January. However, poacher’s attempts to remove Satao II’s massive tusks were thwarted, sparing them from being trafficked in the global illicit ivory market.

The poison suspected of being used to kill elephants, including Satao II, is as old as time but the way in which it is used in Tsavo is very much 21st century. Hunter-gatherer tribes in East and Southern Africa have long used a plant-based “bushman’s poison” dipped arrow to kill small bush game as a source of protein. However, today, commercial poaching networks throughout Africa have adopted the method to the high stakes ivory trade. Although seemingly rudimentary, the poison arrow is inexpensive and widely available, it is easier to transport into protected areas than a firearm, and the kill shot is silent – there is no sound of gunfire to alert KWS Rangers of the crime. The poacher seemingly slips back out of the park with the elephant’s tusks just as he slipped in – without a trace.

Last year, KWS, facilitated by tenBoma, increased directed enforcement action against poaching hotspots in the Tsavos and poaching was driven down by more than 40 percent. A change of tactics – such as the shift from poaching by firearm to poisoned arrow indicates that KWS has been effective by increasing pressure through enforcement action. But, that is just the beginning. Poaching networks are adapting. Enforcement entities must anticipate how the poaching networks will adapt and devise effective counter-measures to stay ahead of the slaughter. 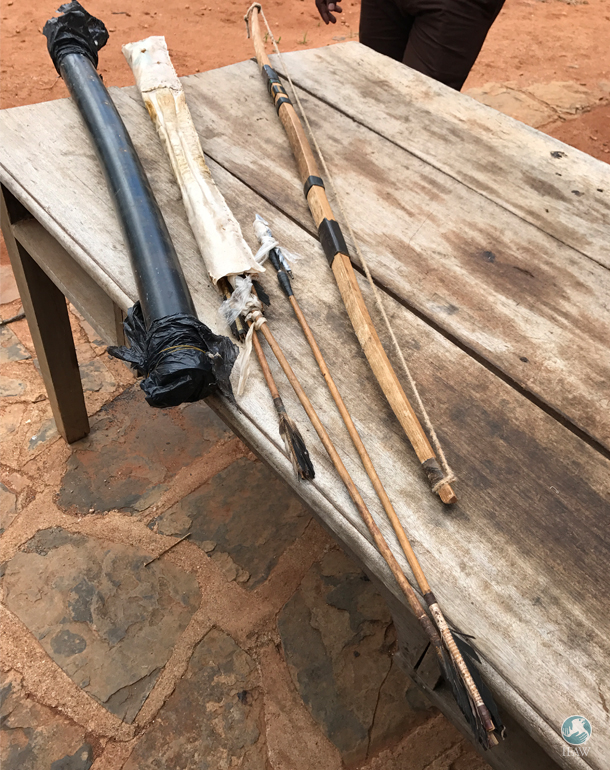 Each component of the arrow forms an evidence trail which could lead investigators to those responsible.

That is precisely what tenBoma is doing by working with KWS and other partners to, for the first time, integrate forensic science into operational wildlife threat analysis. To the blind eye, the arrow may simply look like an arrowhead, shaft, and fletching. But, by combining modern forensic science with ancient “bush knowledge”, each component of the arrow forms an evidence trail which could lead investigators to those responsible.

If effective, this approach will mean that poaching by poison arrow will no longer be a traceless crime. And, those involved will be identified, brought to justice, and elephants can be spared this excruciating, often slow, human greed-driven death.

Founded in 1969, IFAW rescues and protects animals around the world. With projects in more than 40 countries, IFAW rescues individual animals, works to prevent cruelty to animals, and advocates for the protection of wildlife and habitats. For more information, visit www.ifaw.org. Follow us on Facebook and Twitter. Photos are available at www.ifawimages.com