You are at:Home»Travel»Rowing to Rio to save our seas
By Janine Avery on June 29, 2017 Travel, Wildlife

As Braam Malherbe climbed into a tiny row boat on the 1st of January, I boarded the Boating World media boat at Granger Bay to watch this intrepid South African attempt a world first – to row across the Atlantic Ocean completely unassisted.

Africa’s leading importer of luxury motor vessels, who had kindly invited me out to watch Braam embark on his epic journey, make their home here at one of only six Blue Flag marinas in South Africa. And as we cruised out of the pristine Granger Bay harbour, a large sunfish lazily wallowed on its side next to our boat, bidding all a grand farewell.

However the weather was not on his side on that fateful day and Braam wouldn’t leave alongside the sailing yachts heading to South America as part of the Cape to Rio yacht race. Instead adverse windy conditions and a change in crew would see him finally heading out to sea a few weeks later with Wayne Robertson as his new rowing partner. Their goal? To be the first pair to row to Rio unassisted, but above all to raise awareness of the plight of our oceans and to draw attention to the small things everyone can do each day to truly make a difference through their DOT – Do 1 Thing Challenge. 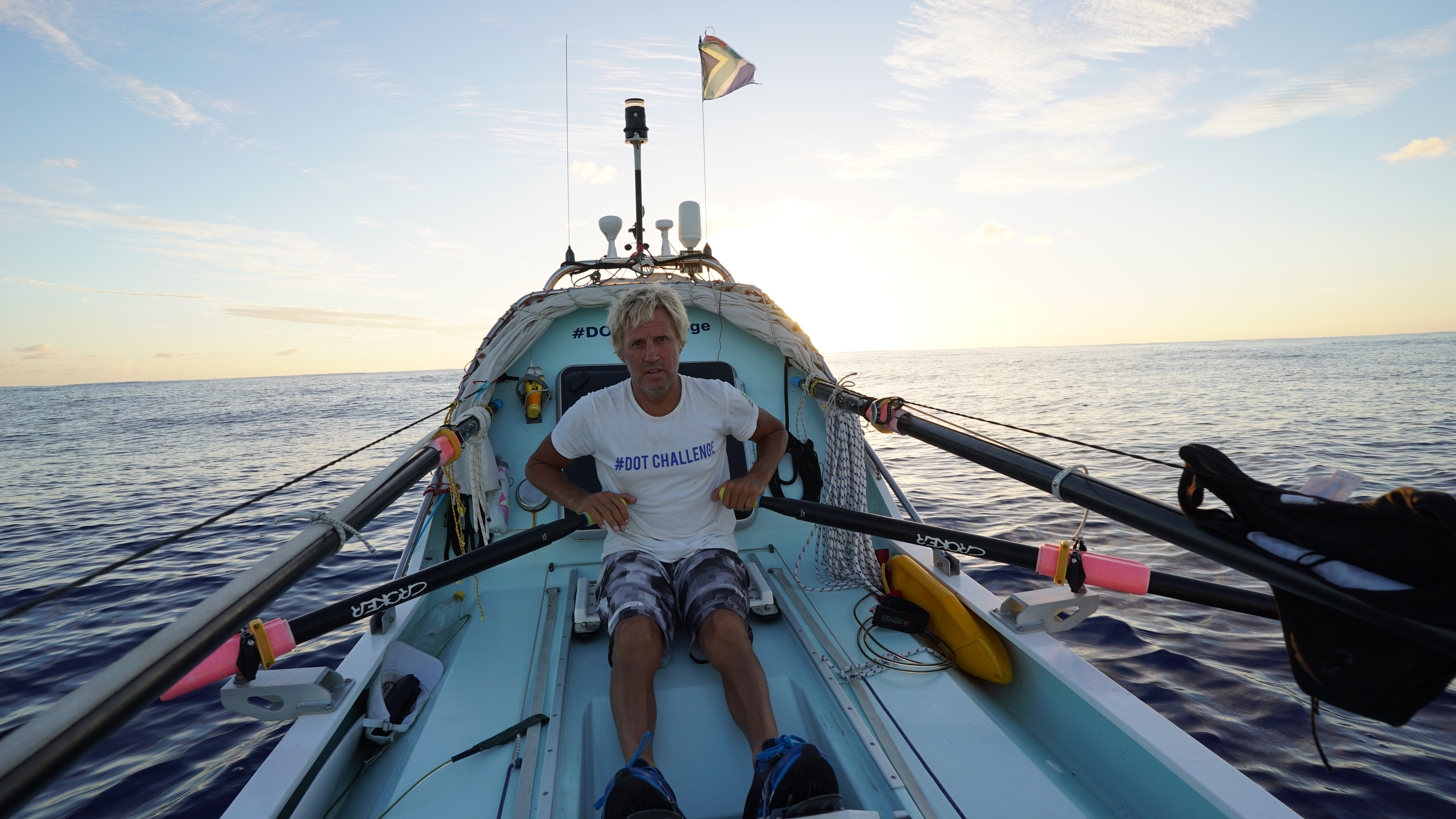 Braam at work in the “engine room”

The state of our oceans

A number of miles later and a different sunfish waved Braam along on his journey. “I was in the small cabin of the boat when I saw what looked like a shark coming towards me. It was difficult to gauge distance because of the incredible visibility. As it neared I recognised it as a huge sunfish. It was curious and came literally within two meters of me, accompanied by three remoras. The sunfish was breathtakingly beautiful, it’s extended dorsal and caudal fins propelling it gracefully and effortlessly next to me with the remoras cleaning all the time, one around the big glistening dark eye, the others at the round open mouth. Glistening silver blue, she spent a good ten minutes alongside me before slowly drifting away, getting smaller and smaller into the big blue,” Braam reminisces.

But unfortunately this was one of very few marine encounters that Braam would experience on his epic ocean adventure.

“Our oceans are in dire straits, in rowing 8,100 km I saw very few fish and no whales,” says Braam. The only dolphins they saw was a school of 50, just a day before sighting land for the first time on reaching South America. A worrying statement for ocean-lovers the world over.

“When we go out boating in Cape Town, seeing whales, dolphins and sunfish are a highlight of our trips. And while we can’t say with certainty that there are fewer of these creatures in the water, sightings are becoming more erratic and inconsistent. We are also starting to see more and more unusual visitors to our waters, like killer whales, a sign that the climate is changing,” says keen boater and CEO of Boating World, Derrick Levy.

It is on this note that Braam embarked on this journey and his hope for the future of our seas: that every citizen on Earth takes stock of what is happening and makes careful and sustainable choices to protect our oceans. It’s a dream that saw him and Wayne travel more than 4,500 nautical miles over 92 days, propelled by only by their oars and their iron will.

The journey of two men

“Being alone on the vastness of the massive South Atlantic in a 6.8-metre rowing boat was both humbling and at times, frightening. Realising one’s fragility was sometimes overbearing,” says Braam.

Their epic adventure included having to deal with satellite phones that didn’t work, solar powered batteries that would not charge because of the cloud cover that persisted for 80 per cent the journey, resulting in the team coming very close to running out of water because their desalinator could not draw sufficient current, facing storm after storm complete with lightning and thunder, breaking a daggerboard, facing physical and mental exhaustion, a number of close run-ins with giant container vessels and even having to go overboard in extreme wind conditions of 25 to 30 knots to release the tension on their parachute anchor. 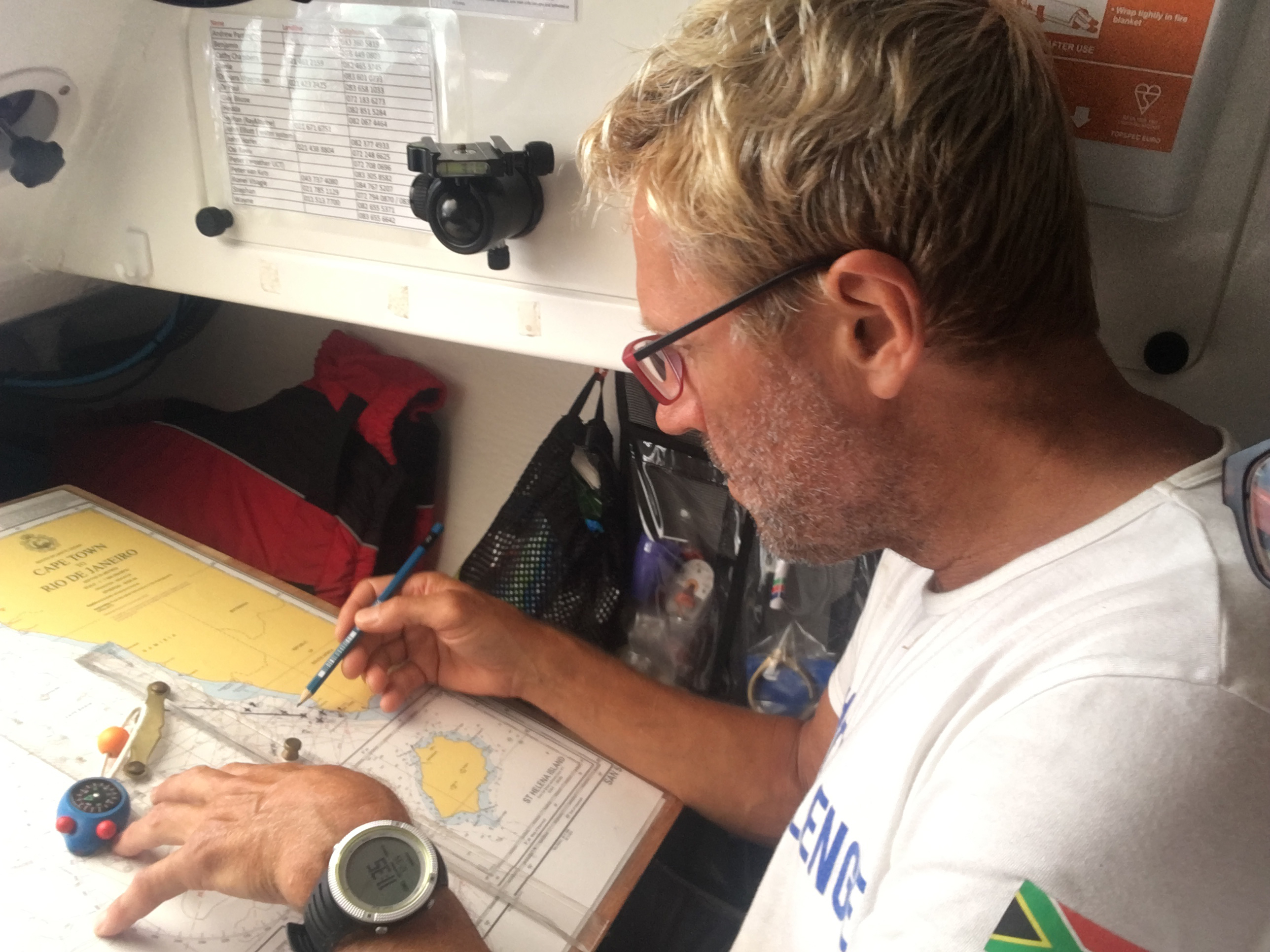 Part of the daily routine – plotting the course and checking weather reports.

In order to keep their sanity and to achieve their goal, they set a 24 hour routine witch saw each of them rowing for about two hours while the other ate, drank and slept. At 12:00 each day the one on duty would plot their position, examine the weather reports and set the direction of travel. In fact the only times they were together were for an hour in the morning and evening to enjoy breakfast and dinner.

However it wasn’t all doom and gloom. Braam remembers one moment at around 3am when, “it seemed the stars had grabbed at my oars in a magnificent display of phosphorescence. As the oars hit the water tiny silvery green droplets moved around them – it looked like a meteor shower in the water. Then as I lifted the oars and moved forward in the rowing seat, the oars dropped beads of glimmering luminous stars onto the sea, almost mimicking the heavens. I rowed in silence with awe and gratitude for this extraordinary gift.

“And then it got even better. I heard splashes around the boat, but all I could make out under the three quarter lit moon was a mass of white dots. I pulled the oars in, stood up and shone my headlight into the water – they were thousands and thousands of powder blue fish darting about as if in an orchestral dance – I looked closer at the water and saw krill, mega tons of krill, like sawdust floating on the water and plummeting into the depths as far as my beam of my light would allow me to see. Box jellyfish or sea wasps passed by, their four long stinging tentacles trailing behind while many small prawns skated just below the surface, darting to and fro, as if on a frozen pond. Cucumber shaped jellyfish with small golden beads moving around in their transparent bodies floated by. It was a feeding frenzy as I’ve never witnessed before.”

Finally land was sighted! However a number of strong storms close to Rio welcomed the rowers with blasting winds right on the nose, massive swells and heavy rain. These storms forced the duo to take refuge in whatever coves they could find and then, the moment the opportunity presented, to row hard to make any headway. But despite feeling like an insignificant cork, bobbing and bouncing around on a very tempestuous sea, the team finally made it to Rio on the 9th of May.

Janine Avery is the first to confess that she has been bitten by the travel bug … badly. Raised by a menagerie of artists, creatives, scientists, researchers, biologists and botanists she is a lover of all things travel from basic tenting with creepy crawlies to lazing in luxury lodges. Janine is also passionate about many things. Among them dabbling in digital marketing, spreading messages on social media, and taking audiences on a journey through her travel stories rank high on her list of priorities, but her puppies will always remain her first love.