You are at:Home»Innovation»Looking at the beginning of everything: South Africa’s part in unravelling the secrets of deep, deep space
By Peter Borchert on December 11, 2017 Innovation

The MeerKAT telescope being built in South Africa’s Karoo is the technology proving precursor to the much larger deep space probing Square Kilometre Array (SKA) project. MeerKAT will come on stream in 2018, allowing scientists to examine light that began its journey through the cosmos before Earth was formed. Astrotnomist Imogen Whittam tells us about the project and why it is so important, globally and for the African scientific community.

One of the world’s largest collaborative science projects is about to enter its most exciting year yet. This will see researchers in a remote stretch of South Africa’s Karoo testing Albert Einstein’s general theory of relativity; imaging neutral hydrogen – the building blocks for stars – in the distant universe; and examining galaxies that were formed billions of years ago.

The Square Kilometre Array (SKA) will consist of thousands of dishes and antennas spread over large distances linked together to form one giant telescope. It will be tens of times more sensitive and hundreds of times faster at mapping the sky than today’s best radio telescopes. A precursor to the SKA – the MeerKAT telescope – is being built right now and remarkable progress has been made in the last 12 months.

MeerKAT will start taking science data with all 64 dishes in early 2018, and there are some really exciting projects planned. I am involved in one of these, a survey called MIGHTEE or the MeerKAT International GHz Tiered Extragalactic Exploration – we astronomers love convoluted acronyms.

My colleagues and I will be using the MeerKAT dishes to make very deep images in four different patches of the sky covering a total of 10 square degrees; approximately 10 times the size of the full moon. Deeper images mean you can see both intrinsically fainter things, and things that are further away. The fact that we can see things that are further away is more exciting: you can think of this as pushing the horizon further away as you make a deeper image.

With this information we will be able to explore how galaxies like our own Milky Way formed billions of years ago and how they have evolved up to the present day. Understanding this is key to answering long-standing questions like how our galaxy and Earth came to exist.

This is just one of the projects that will be conducted using MeerKAT over the next five years, starting in 2018. It’s work that will bring together more than 300 scientists.

Collaborating across the world

The science that’s being conducted at the SKA site is incredibly important. So too is the incredible collaboration that’s required to make the project work. Building such a ground-breaking instrument requires input from scientists and engineers at the cutting edge of their field from across the globe. Such a large collaboration, across many time zones, is logistically challenging but is vital as it enables big scientific breakthroughs to occur.

There are hundreds of scientists – many of them from Africa, and especially South Africa– and more than 100 institutions involved in the SKA project, from 20 countries across six continents.

Engineers are also a critical part of the project. They, too, come from all over the world. The telescope will have two host sites: one in Western Australia and one in the Northern Cape in South Africa, in the Karoo. Additional dishes will be located in eight other African countries; Ghana, Zambia, Madagascar, Botswana, Namibia, Kenya, Mauritius and Mozambique.

Such a project brings with it huge technological challenges: once fully completed the telescope will generate data at more than ten times the current global internet traffic.

These challenges are the reason we’re building MeerKAT on the SKA site. It will allow us to test the technology required for the SKA – and, excitingly, it will also do ground-breaking science in its own right. The global science community was blown away when the first MeerKAT images were produced in 2016 using just 16 of the eventual 64 dishes. 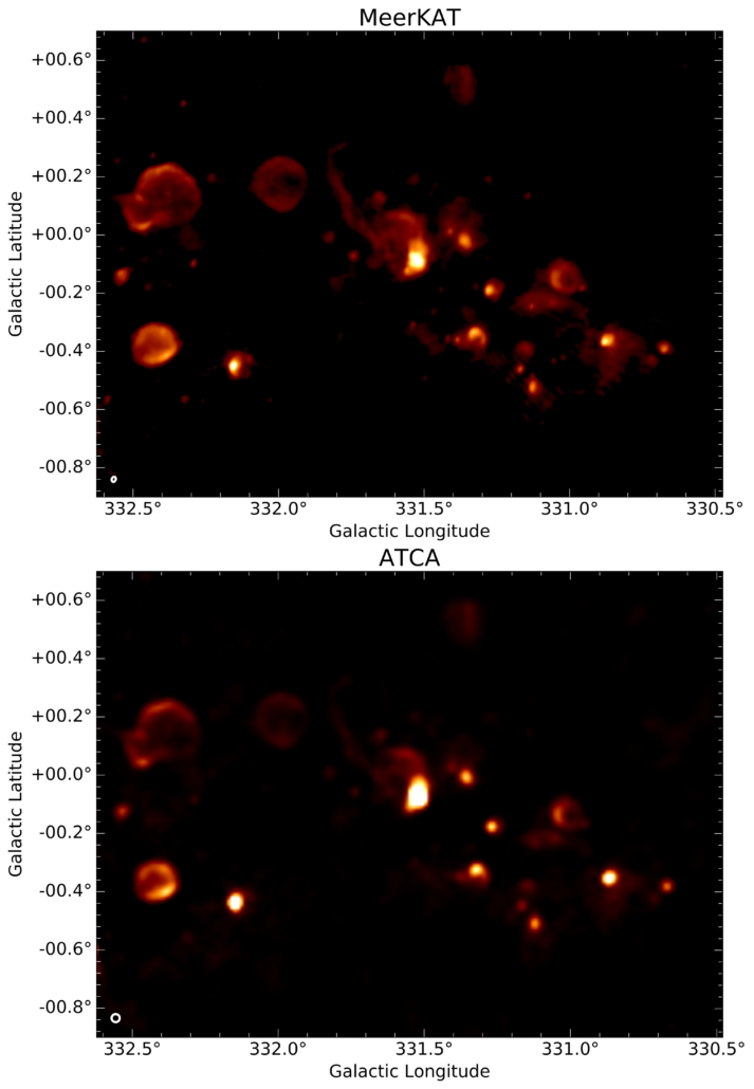 Large scale bubbles and arcs seen with MeerKAT show stellar nurseries (where stars are born) in the Milky Way. For comparison, the previous best image of this star-forming region is shown at the bottom, obtained with the Australia Telescope Compact Array (ATCA). Image: SKA SA

Images presented by the SKA team to South Africa’s Minister for Science and Technology, Naledi Pandor, earlier this year using only half of the eventual 64 dishes are particularly impressive. These include images of a distant spiral galaxy; star-forming regions in our own galaxy; and gas in M83, a famous galaxy discovered in Cape Town in 1752. 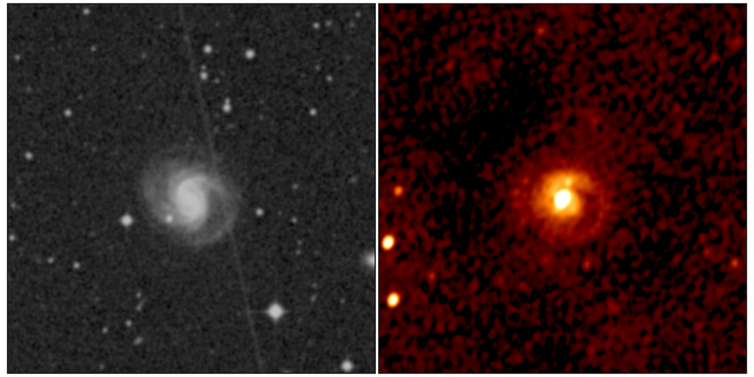 First ever radio image (right panel) of a spiral galaxy previously photographed in visible light (left panel). Both the visible light on the left and the radio waves on the right left this galaxy 230 million years ago. Image: SKA SA

Significant progress has been made since then. All 64 dishes are now in place and the test data being analysed by the commissioning team in Cape Town looks better each day. We are able to make images that are deeper and have a higher resolution than before.

The MIGHTEE survey is just one of the projects that will launch in 2018. I’m involved in it because my work focuses on radio galaxies. These shoot hugely energetic jets of lightning fast particles out into space, and the MIGHTEE survey will give us an unprecedented view of these galaxies.

We hope to answer questions such as how these powerful jets affect the stars forming in the galaxy, and how these galaxies interact with and are affected by their surroundings. The MeerKAT telescope will bring us one step closer to understanding these complex and mysterious galaxies.

Other upcoming projects include observing pulsars – the spinning cores of collapsed stars which act as very precise clocks – to test Einstein’s general theory of relativity, and searching for explosive transients. Pinpointing these short-lived bursts of radio emission will help scientists understand some of the most energetic events in the universe where physics is pushed to the extreme.

This article was published by The Conversation. Read the original here. The author, Imogen Whittam s a post-doctoral researcher in astrophysics at the University of the Western Cape in South Africa.