You are at:Home»Travel»Damaraland game drive at Desert Rhino Camp
By Roxanne Reid on September 1, 2015 Travel

Safari guides are cool people, their brains ripe with knowledge they’re happy to share. The best ones are charismatic and make your days so much fun you never want them to end. But it’s not often you see one of them yoyo with excitement at something he’s seen for the first time. Yet that’s what happened on a game drive from Desert Rhino Camp in Damaraland, Namibia.

We were out in an open 4×4 with our guide, Bons Roman. He was a fun guy, delivering heaps of information peppered with quips and jokes. Luckily, he also knew when to switch off the engine and just sit quietly as the sense of place washed over us.

There on the Palmwag Concession in Damaraland the landscape seemed to stretch forever. Volcanic stones strewed the ground, glowing red in the late afternoon sunlight. With less than 100mm of annual rainfall this land might appear barren but it sustains an amazing diversity of life. 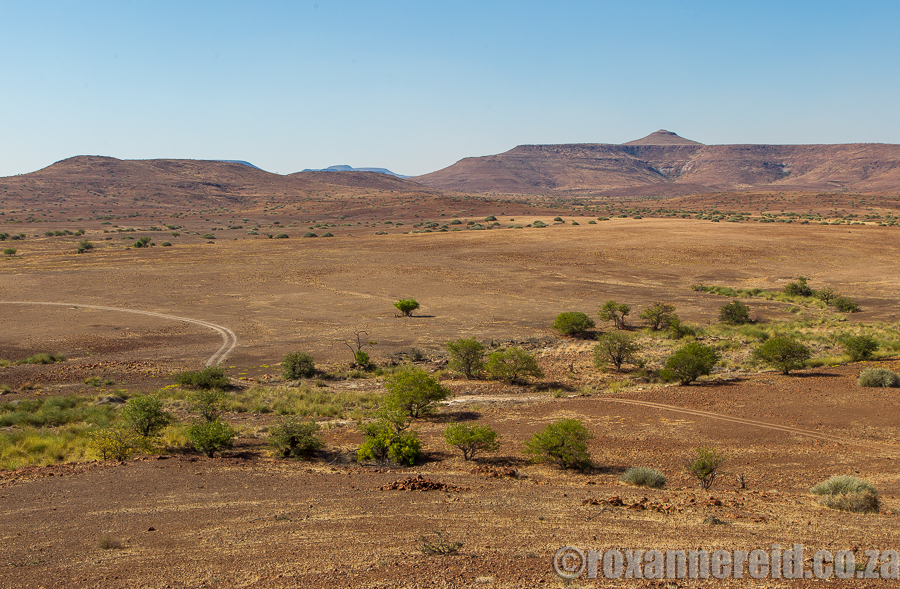 A lone track winds across the vast landscape. 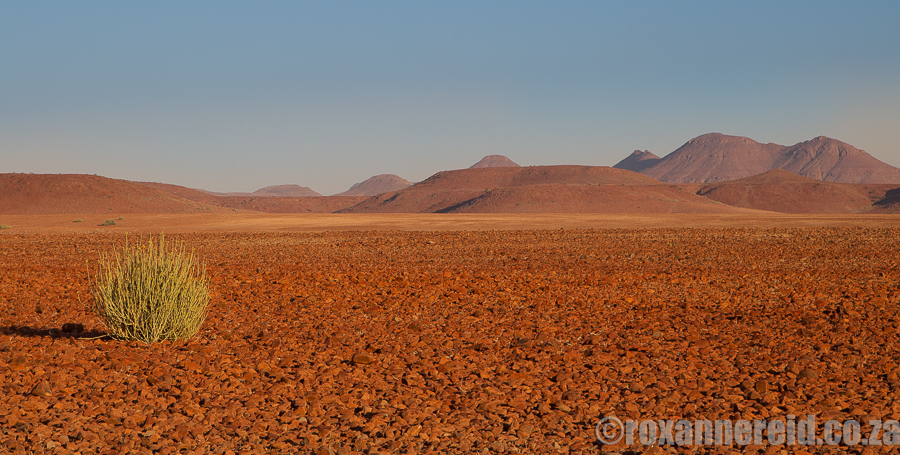 Scruffy shrubs, clumps of trees and grey-green euphorbia bushes dotted the land. Here and there a welwitschia spread its two long leaves along the ground. By the Bons method of calculation – every 10cm of the central disc equals 100 years – most of these bizarre desert plants were 200-300 years old, though they can live 1,000 years or more. ‘Damara people traditionally eat the roasted seeds, though nowadays we prefer chocolate,’ he grinned. 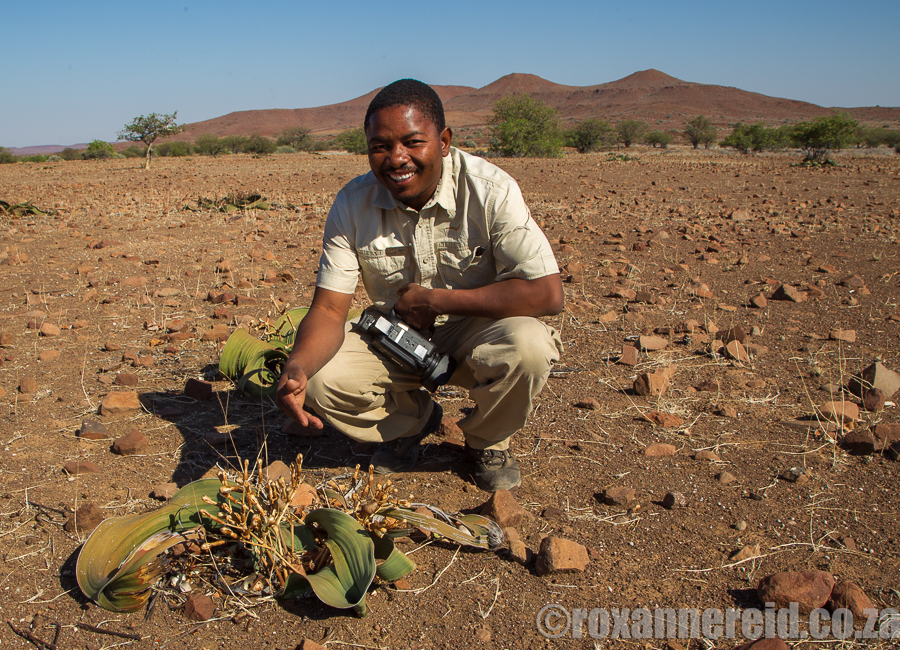 Bons explains his method of calculating a welwitschia’s age – every 10cm of the central disc equals 100 years.

Of course, the big draw card here was the chance to set out behind trackers from Save the Rhino Trust, who monitor and protect Africa’s largest population of free-roaming desert rhino in the Palmwag Concession. Wilderness Safaris, which owns and operates Desert Rhino Camp, helps to support their work; in exchange, the trackers find rhinos for guests to watch. Watching a desert-adapted rhino quietly grazing was a stirring moment, but not the only one here in Damaraland. 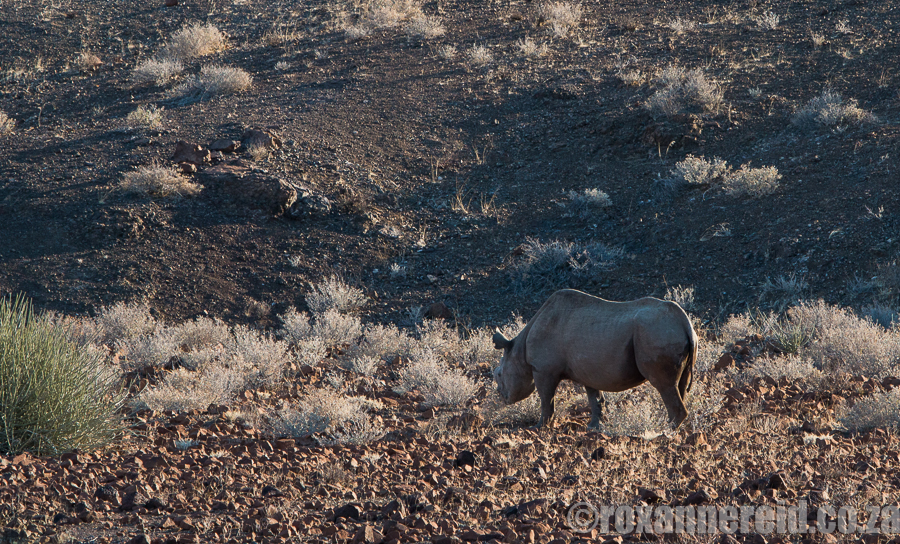 Adapting to the desert

Redbilled spurfowl cackled at each other under a wild ebony tree and a group of Hartmann’s zebra grazed in the riverbed. A blackbacked jackal trotted over the veld, more of a hunter here in the desert than a scavenger. There were plenty springbok and gemsbok too. ‘Research has shown that they eat grass when it’s green after good rains, but in the dry season they’ll browse on leaves,’ said Bons. It’s just one way animals here have adapted to the harsh conditions.

A fascinating adaptation to harsh, dry surroundings is that desert elephants have a pharyngeal pouch behind the base of their tongue. It’s a key survival tool and can hold 7-14 litres of water. Photograph courtesy of Caroline Culbert, Wilderness Safaris.

‘Desert elephants have adapted by not pushing down whole trees as they do elsewhere,’ he added. ‘Here, they just break off branches.’

But an even more impressive adaptation is that desert elephants store water in a pharyngeal pouch behind the base of their tongue. It’s a key survival tool and can hold 7-14 litres of water, which helps them to cover greater distances to the next water source. They retrieve water from the pouch with the tip of their trunk and will share it with calves on long treks. Although the pouch isn’t unique to desert elephants, it’s rarely used by elephants that have easy access to water.

Just before sunset we found a clan of spotted hyaena with six inquisitive youngsters. They came right up to the vehicle to sniff us and nibble the tyres. Two of them lay down, one’s head on the other’s back. When a third tried to join in, a squabble broke out and the interloper got a few sharp nips for its impudence. 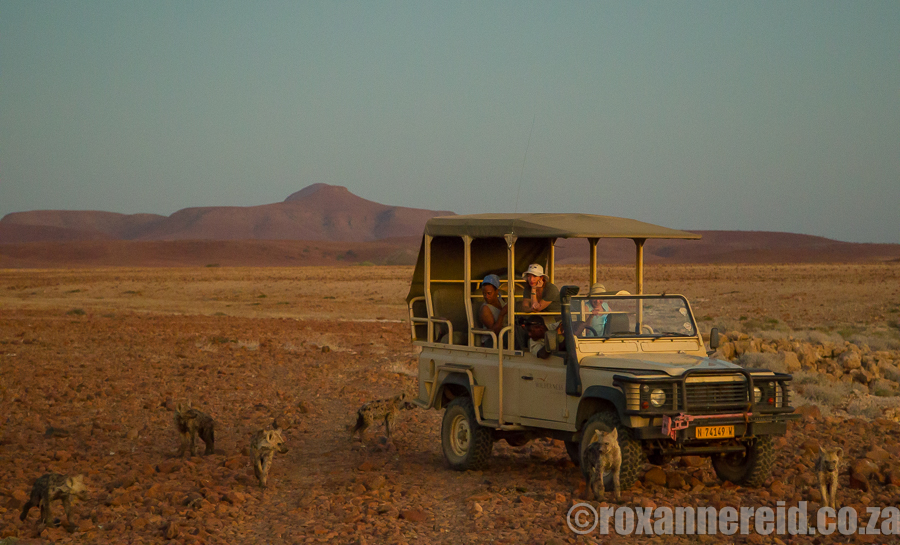 Meeting up with a clan of hyaenas. 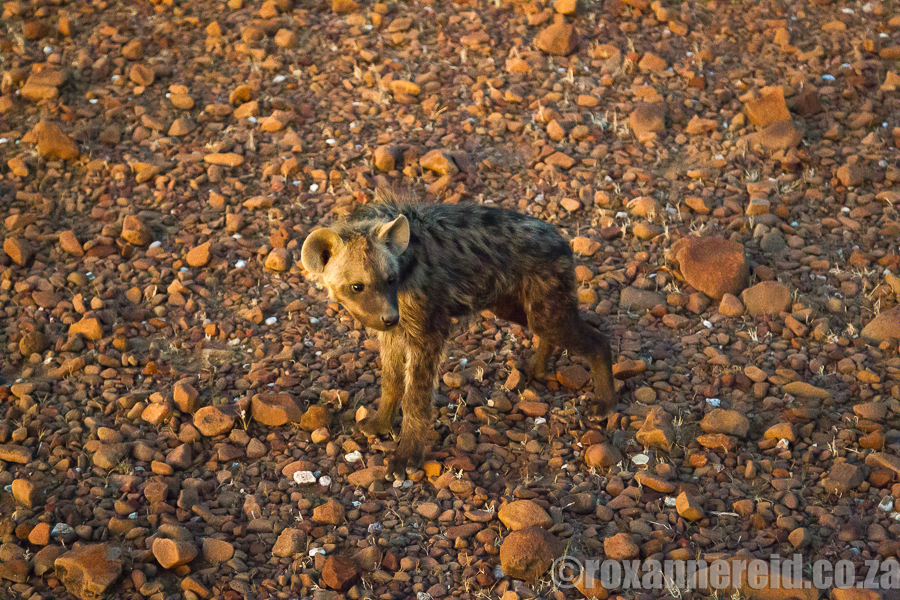 The next morning found us rattling and rolling through a dry riverbed in what Bons called ‘Extreme Safari Mode’. We found a Benguela longbilled lark, endemic to the northwestern part of Namibia, odd-looking bottle trees (Pachypoium lealii), traditionally used for arrow poison, and a sprinkling of giraffe and ostrich. We heard Hartmann’s zebra hooves clattering over dark basalt rock as they trotted away to a safe distance. We smelled a midden, that ‘rhino post office’ used for communication about everything from territory to females in oestrus. And we saw white bones in the veld where two bull elephants had fought to the death a few months earlier – the body of the loser quickly gobbled up by hyenas and vultures. 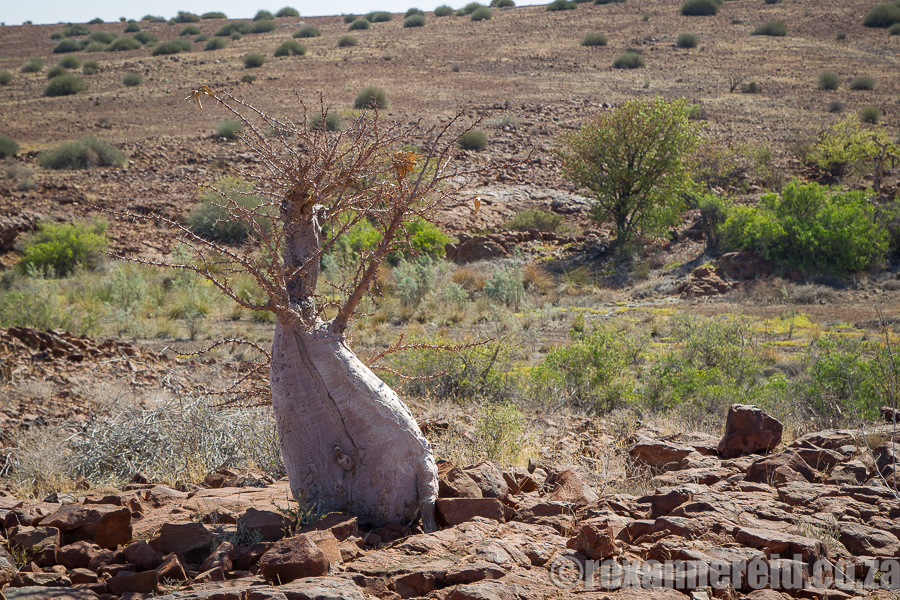 The bottle tree – one of the many strange succulents of Damaraland. The sap is traditionally used as an arrow poison. 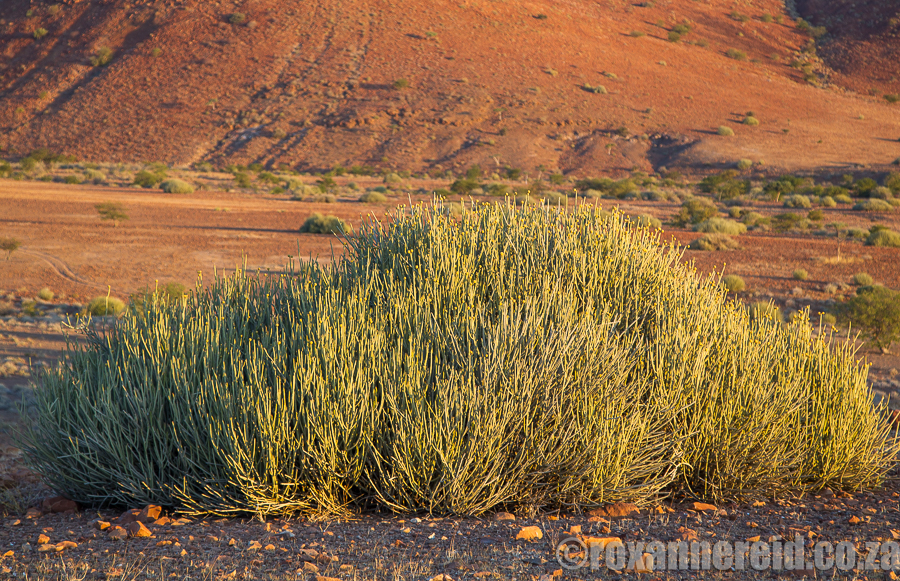 A clump  of the Damara euphorbia.

But the day’s best sighting began with a little body scampering low across the land – a meerkat. Soon it scuttled under a Euphorbia damarana bush, which produces milky latex that’s toxic to most animals except rhino and gemsbok. Once the meerkat had drawn our attention to the bush, we noticed a ground squirrel sitting higher up and munching on the yellow fruits.

Bons bounced up and down like a kid at Christmas. ‘I’ve read in a book that they’ll eat these fruits in winter but I’ve never seen it for myself before,’ he said, his face glowing with pleasure.

Even when you know as much as a good guide does, there’s always something new to learn and observe.

Note: Roxanne Reid was a guest of Wilderness Safaris’ Desert Rhino Camp for two nights, but the opinions expressed are her own. Copyright © Roxanne Reid – No words or photographs may be used without permission from roxannereid.co.za . Read more from Roxanne on her travel blog.