You are at:Home»Innovation»A new species of African elephant
By Newsroom on April 9, 2018 Innovation, Wildlife

A new species of elephant has been found, but it has been extinct for some 120,000 years. It seems that Palaeoloxodan antiquus is the African Forest Elephant’s closest relative, but it’s not as simple as that as some DNA sleuthing reveals.

Ancient DNA changes everything we know about the evolution of elephants

For a long time, zoologists assumed that there were only two species of elephant: one Asian and one African. Then genetic analyses suggested that the African Elephant could be divided into two distinct species, the African Forest and African Savannah elephants.

Now a new elephant has been added to the mix. The palaeoloxodan antiquus has been extinct for 120 000 years. This elephant roamed Europe and western Asia during the last ice age, about 400 000 years ago. A study of its DNA shows that this supposedly European animal is actually the African forest elephants’ closest relative. Another study by the same team found that at a genetic level, it may even have more in common with the modern African forest elephant than the African savannah elephant.

This study changes everything we thought we knew about the evolutionary history and ancestry of modern elephants and their closest relatives. It also shows that the African elephant’s lineage was not confined to Africa; the animals actually went out of the continent, which we didn’t know before. It roamed Europe and – through a lot of interbreeding – left its genetic mark far from its original stomping grounds.

The new find, based on DNA from fossils found in Germany, may also shed light on a DNA discrepancy that has puzzled scientists for some time. 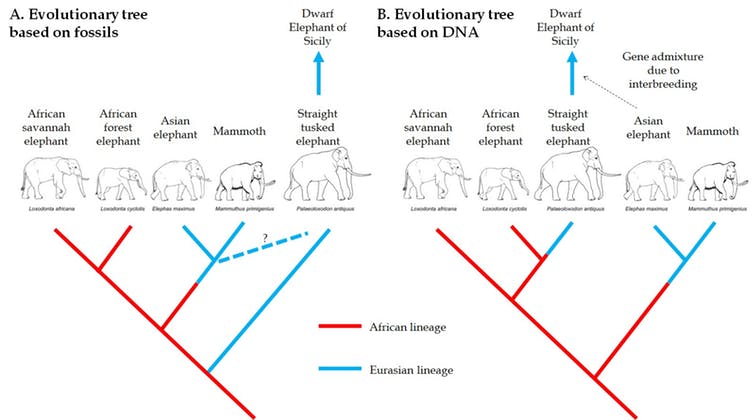 The evolution of elephants

Once it reached Europe, the Palaeoloxodon antiquus had to adapt to new conditions. One of its new homes was the island of Sicily and, as is common when large animals settle on an island, it evolved into a dwarf species. This is a way for large animals to deal with the paucity of resources common on islands.

My own research on this dwarf elephant, Palaeoloxodon falconeri has shown that this remarkable species had an exceptionally large brain. In fact, it’s the only animal species ever recorded with a brain size comparable to a human’s.

There’s a problem, though: DNA revealed some years ago that the Palaeoloxodon falconeri wasn’t descended from or related to any of the African elephant species as expected. Its closest relative was actually the Asian elephant.

This is because the Palaeoloxodon antiquus’ DNA appears to be a mixture of many species’ DNA, which would have happened when they interbred. This process, known as admixture, probably occurred once Palaeoloxodonleft Africa. That’s how its descendents ended up with Asian elephant DNA, and even DNA from the famous woolly mammoth.

It is possible that a small chunk of the dwarf elephant’s DNA analysed years ago was extracted from a fragment of sequence inherited from the Asian elephant – and its other origins weren’t picked up.

This new information about elephants’ evolution and history is extremely exciting. It shows that the two modern African elephant species are heirs of a glorious and evolutionary successful past which still survives and speaks through their DNA. Conservation efforts therefore do not only preserve species, they also save the genetic memories of these peaceful giants.

Author Julien Benoit is a post doctorate vertebrate palaeontologist and palaeobiologist at the University of the Witwatersrand. He has a special interest in the study of the evolution of endocranial structures and sense organs in extinct mammals and therapsids (mammal-like reptiles) using X-ray imagery on their fossilized skulls.

Caption to main photograph: Paleoloxodon antiquus has been extinct for 120,000 years. By Apotea (Own work) [CC BY-SA 3.0 (https://creativecommons.org/licenses/by-sa/3.0)], via Wikimedia Commons

This article was piublished by The Conversation. Read the original here.